This section allows you to view all posts made by this member. Note that you can only see posts made in areas you currently have access to.

Due to circumstances beyond our control, the truck containing all of our equipment had broken down about 500 miles from the venue. Tonight's show at @HOBHouston will be delayed approximately 2 hours. We apologize for the inconvenience, but are very excited to be back in Houston.

Statement from the Goo Goo Dolls:
Due to circumstances beyond our control, the truck containing all of our equipment had broken down about 500 miles from the venue. Tonight's show at @HOBHouston will be delayed approximately 2 hours. We apologize for the inconvenience, but are very excited to be back in Houston.
47


Thanks to @heathergoo for these two:

« on: September 30, 2018, 09:41 AM »
The staff at Absolute Goo would like to wish the happiest of birthdays to a great bassist and even greater person, Robby Takac!  Is there a better way to celebrate than kicking off a new tour?  Phoenix, make sure you show him some birthday love!
49

Sept. 28 (UPI) -- The Goo Goo Dolls are embarking on a 20th anniversary tour for seminal album Dizzy Up the Girl, and frontman John Rzeznik is excited to see the "hardcore" fans.

Rzeznik, 52, told UPI he considered marking the anniversary of the 1998 album that spawned chart-topping hits "Iris " "Slide" and "Broadway" with shows in New York, Chicago and his native Buffalo, N.Y., but his booking agent suggested he and his bandmates, fellow founding member Robby Takac and current drummer George Tutuska, make it a full tour.

He said the tour will be focused on "small-ish" venues to give the most intimate-possible experience for what he describes as the "more hardcore fans." The first half of the show will be Dizzy Up the Girl played start to finish, while the second half will highlight some of the band's "deep cuts."

Rzeznik said he wants fans to have an authentic experience at the anniversary tour.

"I mean there's no way to recreate something like that exactly the way it was," he said. "But I'm gonna try."

While the band's musical style has evolved in the past 20 years, Rzeznik there isn't much temptation to update the older material.

"Sometimes, looking back at the older stuff, you just have to accept it for what it is. It's like, 'Oh, that's a pretty accurate representation of who and where I was at the time that I wrote that piece of music.' OK, is it my favorite thing? Eeeeeehhh, who cares?" he said.

He said some newer songs from 2016 album Boxes and last year's EP You Should Be Happy might also appear during the second half of the show, but fans shouldn't expect to hear any brand new, unreleased material.

"You can't do it anymore. The room's full of people and everything's a video camera," he said. "I'm not gonna tell people, 'Oh, you've got to put your phone in a bag at the gate.' I'm not gonna do that, that's stupid, I want people to record our stuff. I want them to enjoy it again and again."

The Goo Goo Dolls started in the late 1980s as punk rock outfit Sex Maggot -- "There's no proof of that!" Rzeznik laughed -- before pivoting in the late 1990s to the pop rock sound they would become known for.

The band first appeared in the charts with "Name," a single from their 1995 album A Boy Named Goo, before Dizzy Up the Girl came along three years later with a string of radio hits.

Rzeznik said the stylistic change that began with Goo and continued with Dizzy was less about trying to make the band more commercial and more about his own musical evolution.

At some point in the mid-90s, Rzeznik said, he became disillusioned with the music the band had been making up until that time.

"I reached a certain age and it's like, 'Punk rock, that's for kids.' I hate to say it, but I felt at a point in my life, like 'I'm outgrowing this. And I feel silly doing it.'"

Rzeznik said he started writing the songs that would become the Goo Goo Dolls' biggest hits and the band embraced the new style. The fans, he said, were also mostly on board.

"Of course, there's going to be a small group of people, very vocal -- it's always the vocal minority -- that just comes out and says, 'You suck, you sold out,'" Rzeznik said.

He said those former fans don't realize that the Goo Goo Dolls didn't actually make any money from their decade-long music career until well after Dizzy was released.

"Boy Named Goo was a substantial, huge record. I mean it sold a few million copies. And to just have somebody go, 'Oh yeah, no, you didn't make any money,'" the singer recalled.

Dizzy Up the Girl was the band's first profitable record, and remains their largest commercial success to date. Rzeznik attributed the album's popularity, and its enduring resonance, with its relatable subject matter.

"I think that album made people feel a little less alone," he said. "The overwhelming thing that everybody says about our band was, 'You know, you really helped me get through a bad time.' Or 'That meant so much to me.'"

Rzeznik said the emotions people were connecting with on Dizzy were the feelings he was personally dealing with at the time he was writing the songs.

"I was going through a divorce at the time, and my life was so exciting on the one hand, but so sad on the other. I think I kinda mixed that together," he said. "I always work harder when I'm miserable."

Rzeznik said a different brand of misery was involved when he was writing "Tattered Edge/You Should Be Happy," the title track from the Goo Goo Dolls' 2017 EP, which surprised many Goo Goo Dolls fans by delving into new subject matter for the band: social commentary.

"I wrote that song at a moment of frustration," Rzeznik said.

The song tells the story of an American populace desperate to escape from their problems rather than face them, with lyrics like: "Are we stupid or brave//Do you think we can save what's left of the American dream//They say we didn't pay to hear opinions//So why don't you shut up and sing?"

"I think that politics keeps people from seeing the real problem in this country, which is class struggle and the lack of equality for everyone," Rzeznik said. "The real divide in this country is between the working poor and the obscenely rich ... It's doesn't lie in being a Republican or a Democrat or anything like that."

Rzeznik said he was aiming to make more of a "social statement" than a political one.

"People used to be in unions. People used to watch out for each other. And for the last 38 years, this country has been dog-eat-dog, race to the bottom," he said.

The class divide has only gotten worse while people seem less and less aware of it, Rzeznik said.

"I'm not saying anything against Trump, OK? Because that is a can of [expletive] that I don't want to open. But when it was decided to repatriate all that money to the states, everybody did stock buy-backs and gave themselves bonuses. They didn't reinvest the money into making more jobs in America. And when they bailed the banks out, what did the taxpayer get? The bill!"

Rzeznik said he didn't want to write an overtly political song, because it's "too dangerous to have a public opinion. But that was the point of the middle of that song. 'I can still dream, it's still legal to resist, as long as my eyes are closed.' It's like, yeah, as long as my mouth is closed."

The musician said his experience has taught him not to be afraid to try new things, so long as he is looking toward the future.

He said even the upcoming nostalgia-heavy tour is part of the Goo Goo Dolls' quest to move forward.

"I wanna focus on where I'm going," Rzeznik said. "Where am I now? Where am I going? And this is sort of putting the lid on that record. I'm happy to go out and celebrate that time, because that was such an important record to so many people and that record was part of so many people's lives. I'm so excited to share it one last time."

"Believe me, we'll never do anything like this again."

The Dizzy Up the Girl 20th anniversary tour kicks off Sunday in Phoenix. A complete list of dates is available at the Goo Goo Dolls' official website.

**These lotteries are now closed**

Click the link to enter and good luck! Remember - One entry per person per show. Lottery closes at noon, EST on September 16th. Must be 18 to enter. Meet and Greet does not include show ticket. You MUST have a show ticket to attend the Meet and Greet. Meet and Greet is for one person only & ID must match winning name. 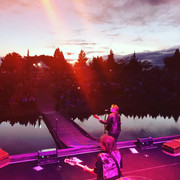 Thanks to Helen G. for sharing these photos and video clips!


Clip of Stay With You:


Clip of Tattered Edge/You Should Be Happy:

Congratulations to all the winners!!


Click the link to enter and good luck! Remember - One entry per person per show. Lottery closes at noon, EST on September 2nd. Must be 18 to enter. Meet and Greet does not include show ticket. You MUST have a show ticket to attend the Meet and Greet. Meet and Greet is for one person only & ID must match winning name.

Thanks to @backpackdave2012 for these 2:

Thanks to Anja for these videos:


Some nice photos and video clips thanks to ev_pack:
https://www.instagram.com/p/BmZZYrrFHb2/?utm_source=ig_share_sheet&igshid=17wwp843qatgy

One entry per person per show. Lottery closing at noon, EST on August 19.  Must be 18 to enter. Meet and Greet does not include show ticket. You MUST have a show ticket to attend the Meet and Greet. Meet and Greet is for one person only & ID must match winning name.
Pages: 1 2 3 [4] 5 6 7
Copyright © 2019 Absolute Goo | Web design by Me